Skip to content
May 9, 2013July 19, 2013 Author by freescottyPosted in Visiting Contributors 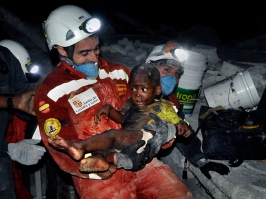 As an anthropologist, and one that focuses on Haiti, it is imperative to think and reflect on representation: how we represent those we work with, and to what end. These representations are not some sort of post-modern exercise in self absorption (though in academia, anything can become an exercise of self absorption). The ways in which objects, places, and people are represented has a profound effect materially. In the case of Haiti, it legitimizes extractive occupations and the continual presence of international powers using Haiti for markets and labor. It also legitimizes the short term mission trips that populate many of the flights to Haiti.

I recently gave a guest lecture at Montgomery College in Maryland. During that lecture and the following discussion, we thought through some of the work of Mary Renda (“Taking Haiti: Military Occupation and the Culture of US Imperialism, 1915-1940” (2000)), in which she discusses the occupation of Haiti by US marine forces. Peppered through are the words of the US marines, led by Smedley Butler. He referred to the Haitian soldiers as “my little chocolate fellows.” Using this phrase, we turned to the ideas of paternalism. Within those four words, we uncovered the pejorative and racialized account of Haitians that legitimized an occupation. Writing back to the Senate, the Marines expressed that they had encountered “a huge estate that belonged to minors.” This language fostered a moral superiority that legitimized an invasion.

During that lecture, the students and I discussed not only how this language dehumanizes and diminishes, but also how there are material consequences of those actions. Private industry (bankers, railroad owners) pressured the US occupation of Haiti, and the private gains that were at stake motivated Woodrow Wilson’s administration to enter and formally begin the occupation. But only, of course, with the moral superiority that permeated those paternalistic statements.

Our discussion then turned to the earthquake of 2010, and how this discourse continues through the present day. I asked students to look through the winning photographs from the Pulitzer Prize for Breaking News Photography in 2011. The photographs are startling, so advance with caution. Certainly, they depict the death and sorrow that permeated the earthquake. But there is a startling and dehumanizing of representation that runs through these photos. Images of violence, the grotesque, and a type of neo-colonial salvation are side by side, and in the collection, the narrative of primitivism and violence are kept alive and well.

Looting and pillaging are depicted repeatedly throughout the collection, giving a sense of widespread social disorder. Yet other authors and scholars have repeatedly contested this, arguing that following the earthquake, “there was no violence or ‘a day without rule.’ In the midst of near disaster, people were trying to go on” (Katz, 2012).

Alongside violence, the series of photographs highlights the elderly and defines Haiti through an odd lens of helplessness. Looking down from above, we see the elderly given a bath on open toilet seats. There are no faces, just bodies. In that moment, an unclothed elder is juxtaposed with open toilet seats as he is bathed by an attendant. There is a mixing and molding of profane (toilets, waste) and helpless immobility (elderly, wheelchairs). With these images we are urged to think about Haiti and the earthquake in terms of helplessness, a helplessness that exists in a space of ‘contaminated mortality.’

But perhaps the most significant images are those of the foreign relief worker saving a Haitian baby. Or the foreign doctor hugging a child. In these moments of caring, of power and compassion, the foreign, white, aid worker is comes to the salvation of children. Juxtaposed with the previous photographs, that salvation becomes defined against a contaminated helplessness and violence, proposing the foreigner as savior for the catastrophe.

Gina Athena Ulysse, the talented performer and anthropologist, does a far better job than I at deconstructing these representations of Haitians. She writes how Haitians have often been portrayed historically as fractures and fragments, bodies without minds, heads without bodies, or simply roving spirits (see Tectonic Shifts, 2012). In these photos, these fragments are spread in a very particular narrative of disaster. Fragments of bodies. Helplessness. Not the Haiti of solidarity, the cooperative, the neighbor lending hand to neighbor. Rather, Haiti the odd, the irregular, the ‘exceptional’ (as Troulliot might have us say). In the midst of all of this, the cure presented is the white savior.

Writing from a school of international affairs, one must think about the effects that these images continue to have on conversations of politics and policy. Do these types of images play roles in justifying international meddling in Haiti’s affairs, the removal and appointment of Presidents? Do they serve to further legitimize the interventions of the supposed “10,000 NGOs,”?

It is not only the writings we must write against, but also the narrative images that propel the “saving” of Haiti. Images may pull at our heart strings, and compel some sort of continued engagement, but perhaps one of the roles of this post (and perhaps this blog), is to ask for a moment to think, a moment to understand the way that other people are being spoken about and represented, and how historically these representations have occurred. If we commit to learning from the past, then we should realize that the these narratives and images of dehumanization coupled with salvation have many times before been a first step towards control and violence.

View all posts by freescotty

About Focus On Haiti

The Focus On Haiti Initiative promotes scholarship and policy discussions on Haiti at the Elliott School of International Affairs, in the Washington, DC area, and with our online audience.
%d bloggers like this: